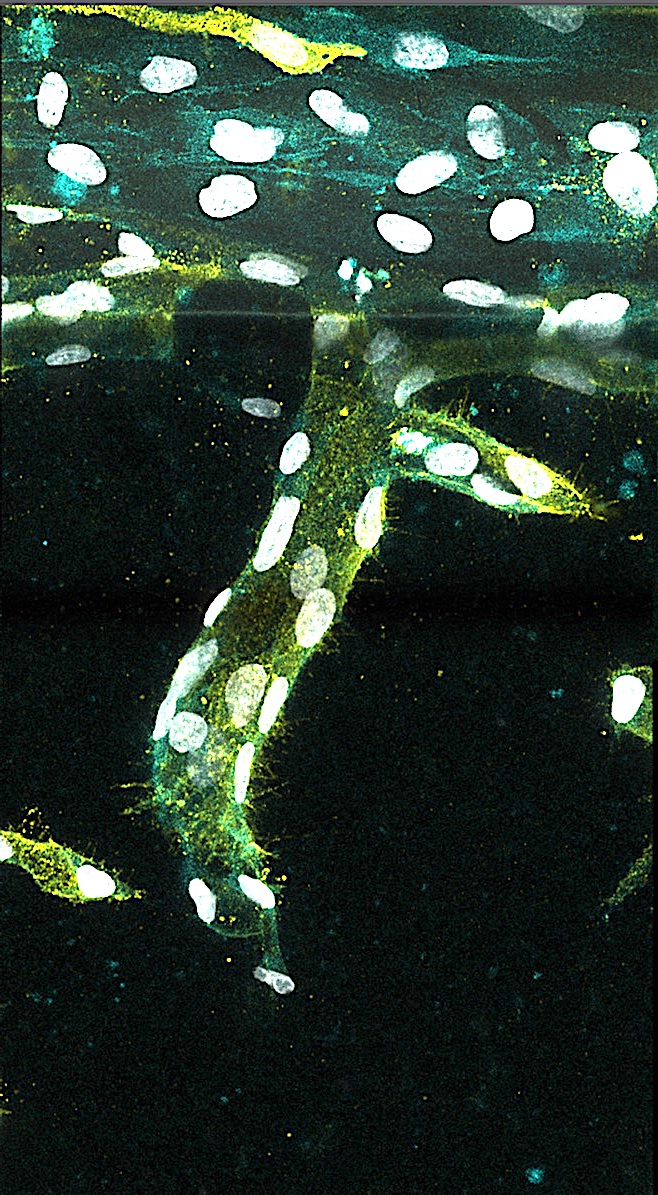 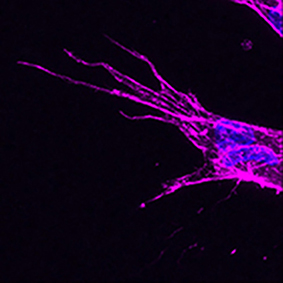 Angiogenesis, the growth of new blood vessels, is a crucial process in the development and progression of cancer and eye diseases. Inhibition of angiogenesis is therefore an important curative and palliative treatment strategy. However, present therapeutic approaches are indirect, aimed at tumor and/or stromal cell derived growth factor actions, and have therefore limited efficacy. Improvement is foreseen in targeting alternative pathways and molecules in the pathologic neovasculature directly.

In angiogenesis, the functional shift of quiescent endothelial cells (ECs) into activated phenotypes that migrate and proliferate to form a sprouting blood vessel is a key event. So far, three specific EC phenotypes have been identified in angiogenic sprouts, each with a distinct cellular and functional phenotype: (1) “tip cells” pick up guidance signals and migrate through the extracellular matrix; (2) “stalk cells” proliferate, produce extracellular matrix, and form a vessel lumen; and (3) “phalanx cells” form a quiescent monolayer in the maturing vessel. As the formation and proper functioning of both stalk and tip cells is essential for the process of angiogenic sprouting, these cells form attractive targets for the development of alternative ways of therapeutic inhibition of angiogenesis in cancer and ocular disease.

For a number of years, the Ocular Angiogenesis Group has developed a model for tip cells in vitro, which made research on tip cells considerably easier. In addition to research into cell biological mechanisms in these cells, we use this in vitro tip cell model to discover new mechanisms and proteins that could serve as a target for anti-angiogenesis in patients.

The Role of Heparan Sulfate and Neuropilin 2 in VEGFA Signaling in Human Endothelial Tip Cells and Non-Tip Cells during Angiogenesis In Vitro.
Cells (2021) 10:926


The role of glycolysis and mitochondrial respiration in the formation and functioning of endothelial tip cells during angiogenesis.
Scientific Reports (2019) 9:12608

Endothelial tip cells in vitro are less glycolytic and have a more flexible response to metabolic stress than non-tip cells.
Scientific Reports (2019) 9:10414

Consensus guidelines for the use and interpretation of angiogenesis assays.
Angiogenesis (2018) 21:425-532.

Computational Screening of Tip and Stalk Cell Behavior Proposes a Role for Apelin Signaling in Sprout Progression.
PLoS One (2016) 11:e0159478.

Rapid optimization of drug combinations for the optimal angiostatic treatment of cancer.
Angiogenesis (2015) 18:233-44.